It was a very spur of the moment road trip (which is very like us). We had only

planned this trip two days before we left. But surprisingly we were ready. On our way

from Arizona back home to Utah, we had a very well laid out map with many different

landmarks and destinations to stop and see on our way!

The adventure began late Saturday afternoon. I flew into the Pheonix airport, from

there I was greeted by my cute boyfriend and our sweet new ride.

With a three-hour drive ahead of us and multiple different pit stops, we fueled up on

some In-and-Out and quickly got on the road. Our first stop was Arcosanti, an urban

development built-in 1970 by architect Paolo Soleri. Unfortunately, we were half an

hour late to their closing time of five pm. Although we still managed to peek around

the building. This building is such a hidden gem in the Arizona desert, and honestly a

must-see for anyone interested in architectural design. Soleri’s creation was a 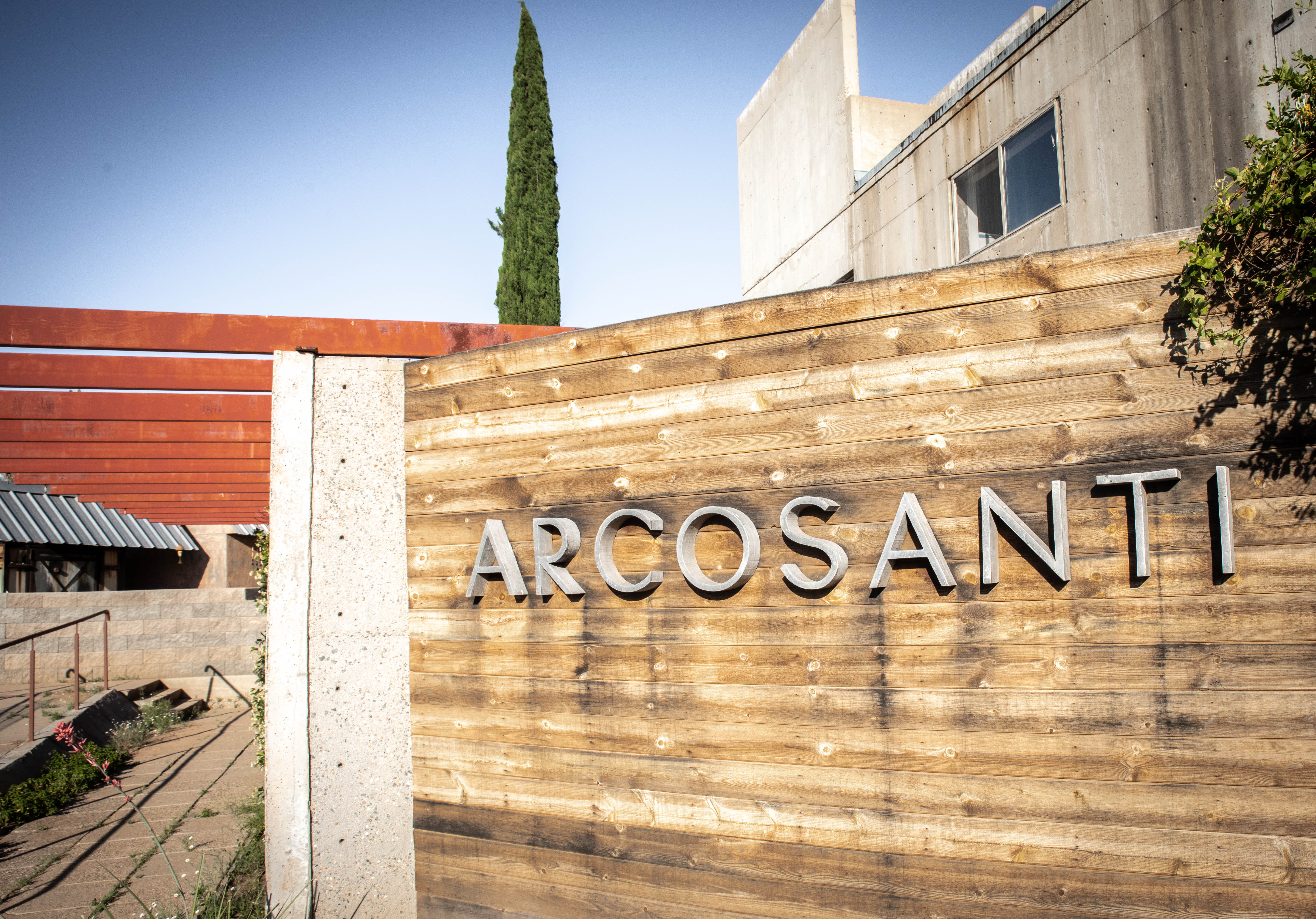 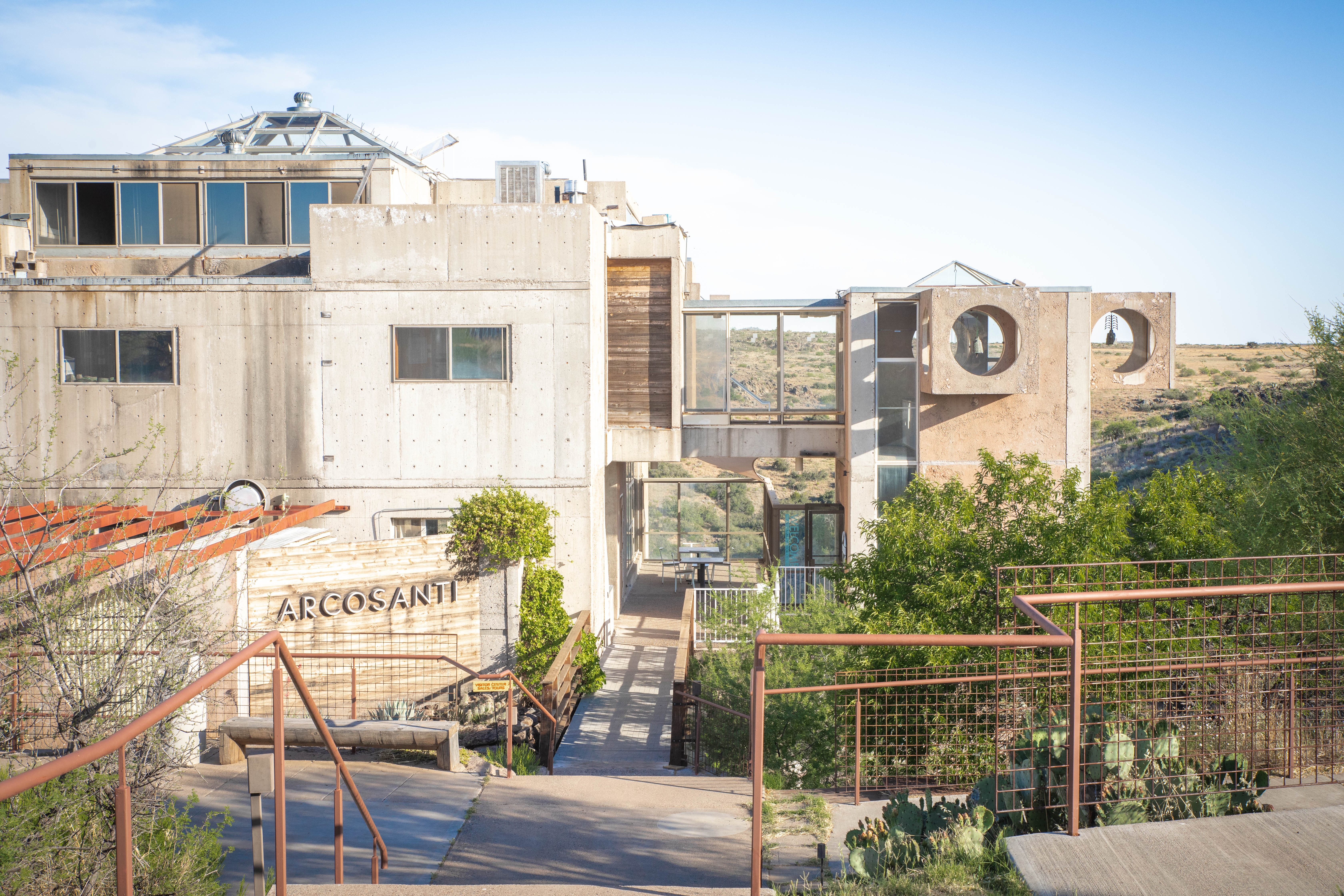 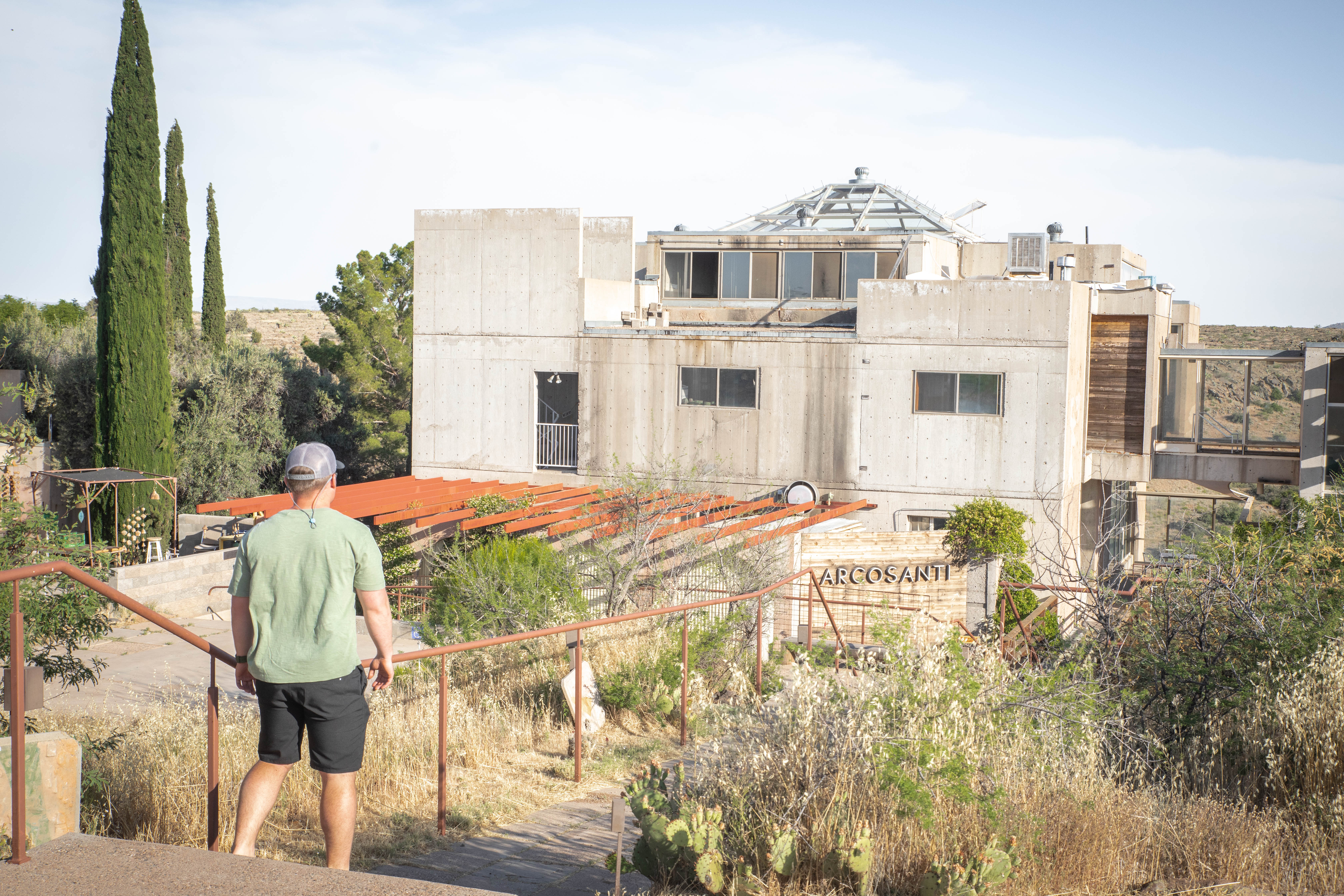 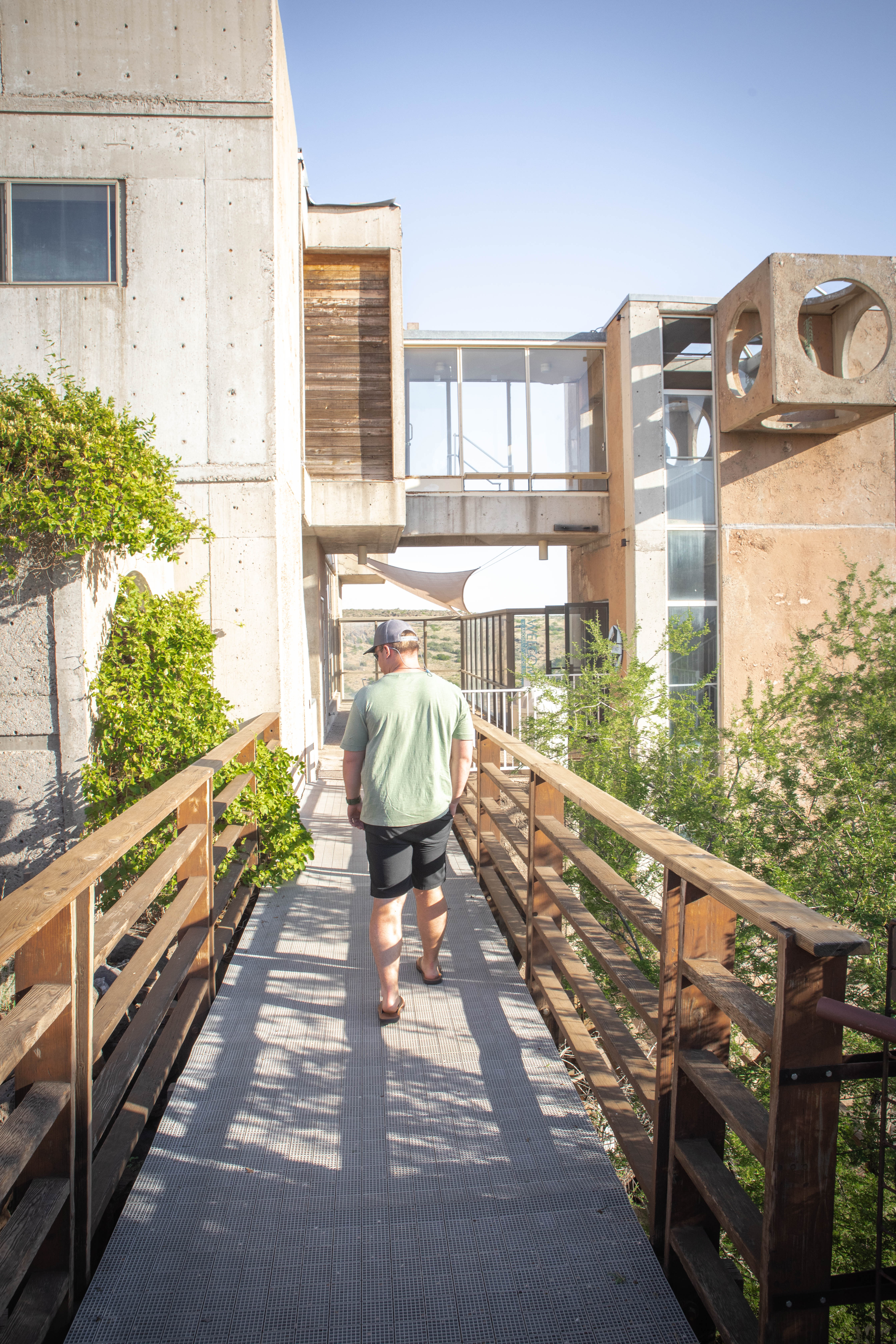 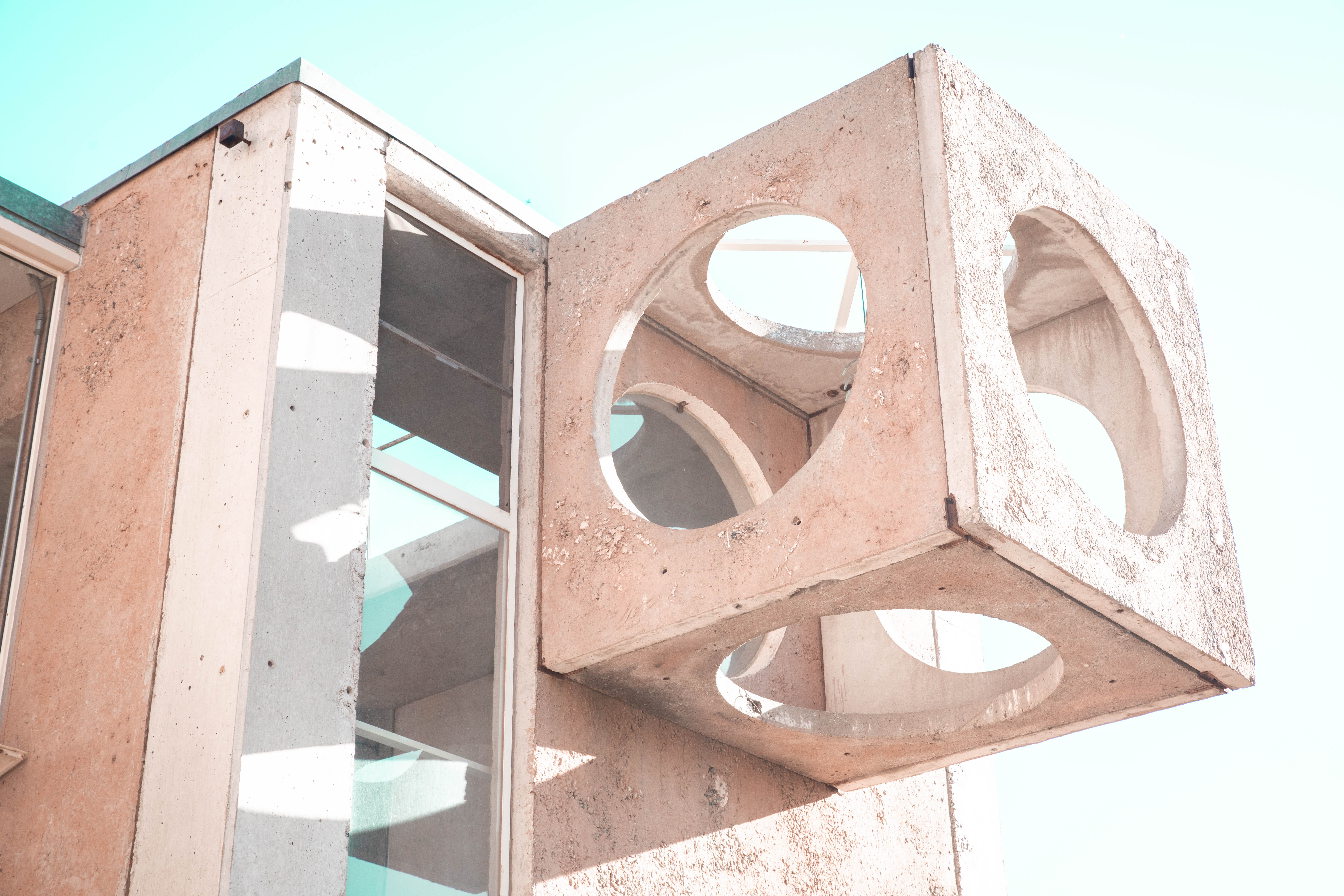 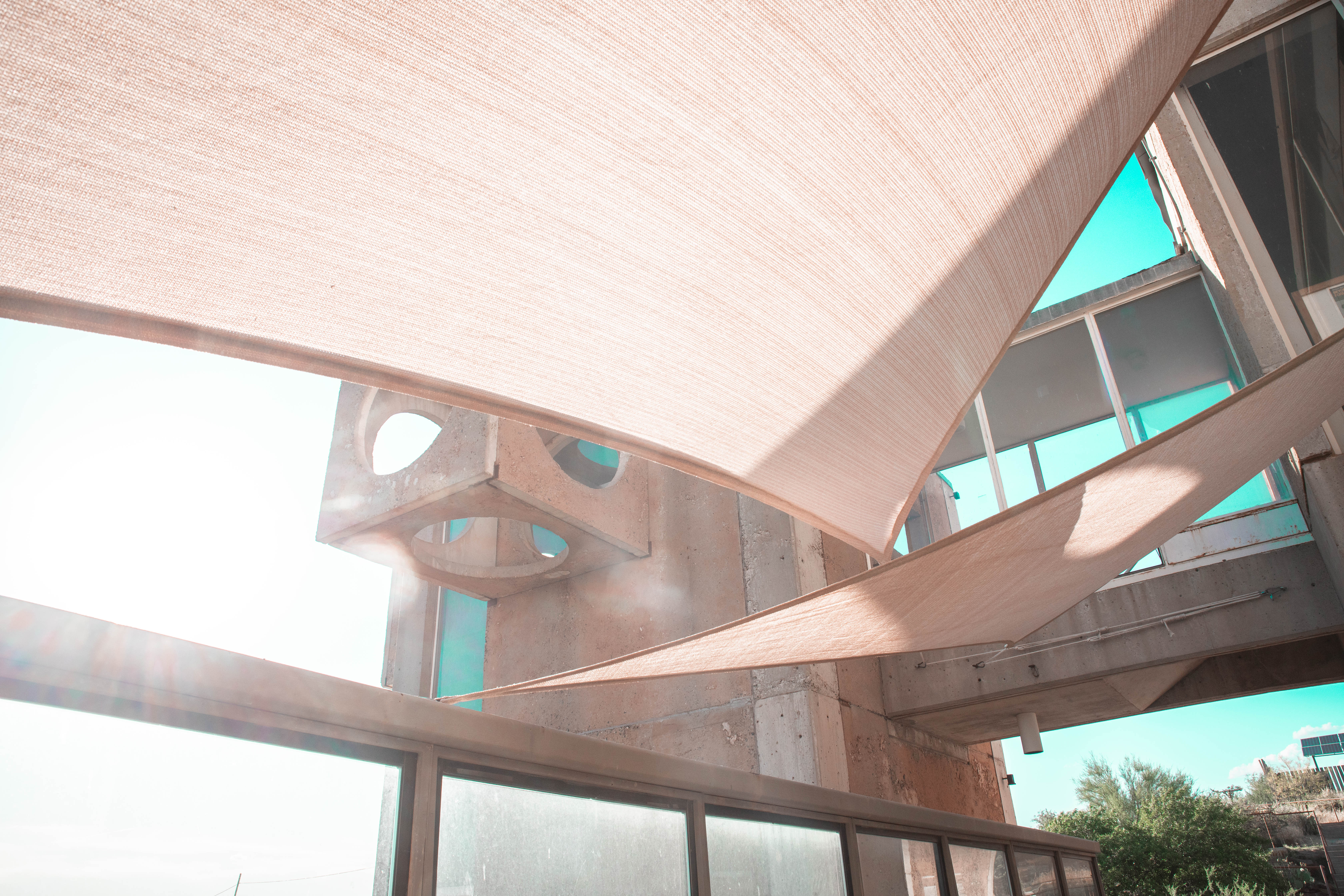 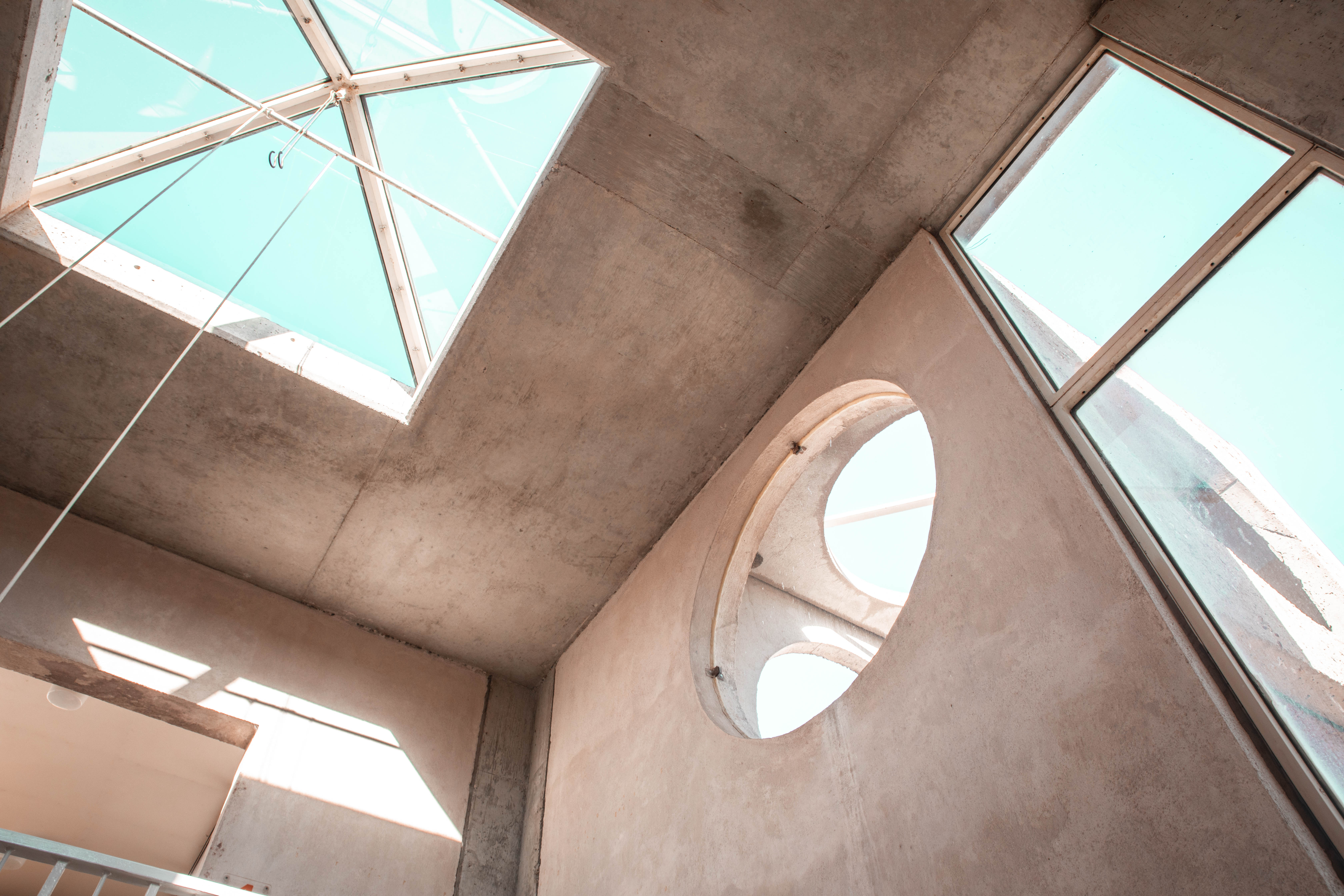 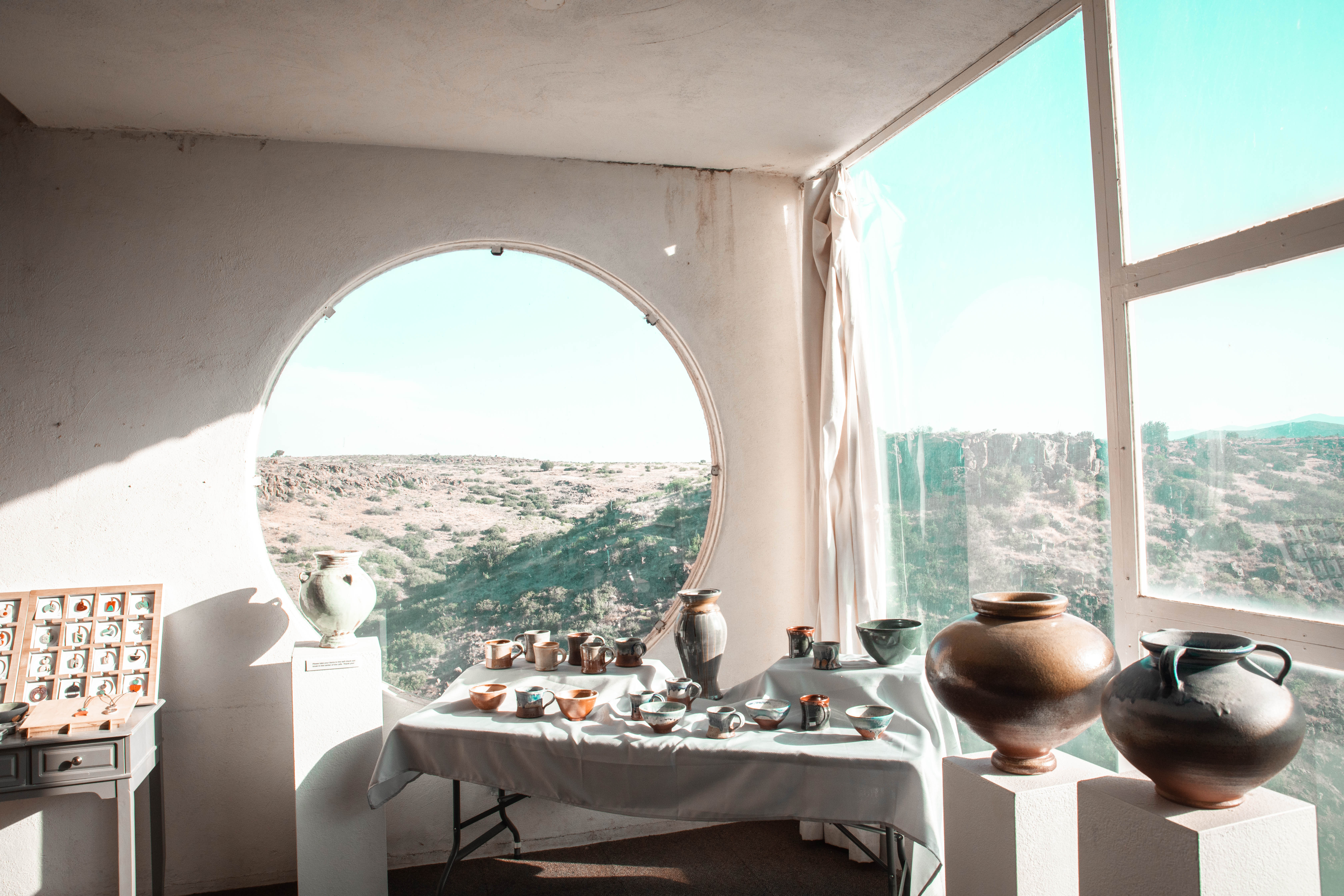 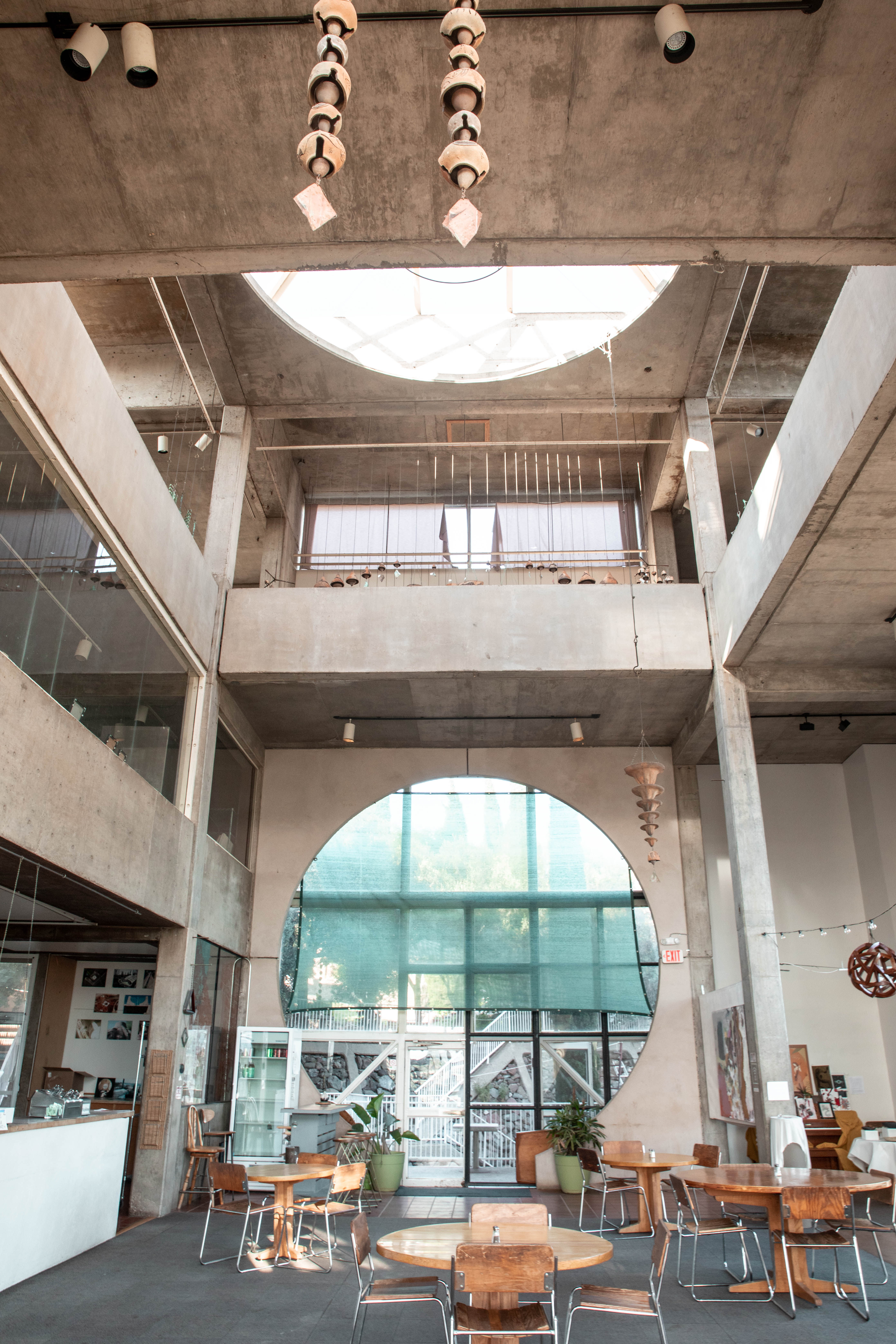 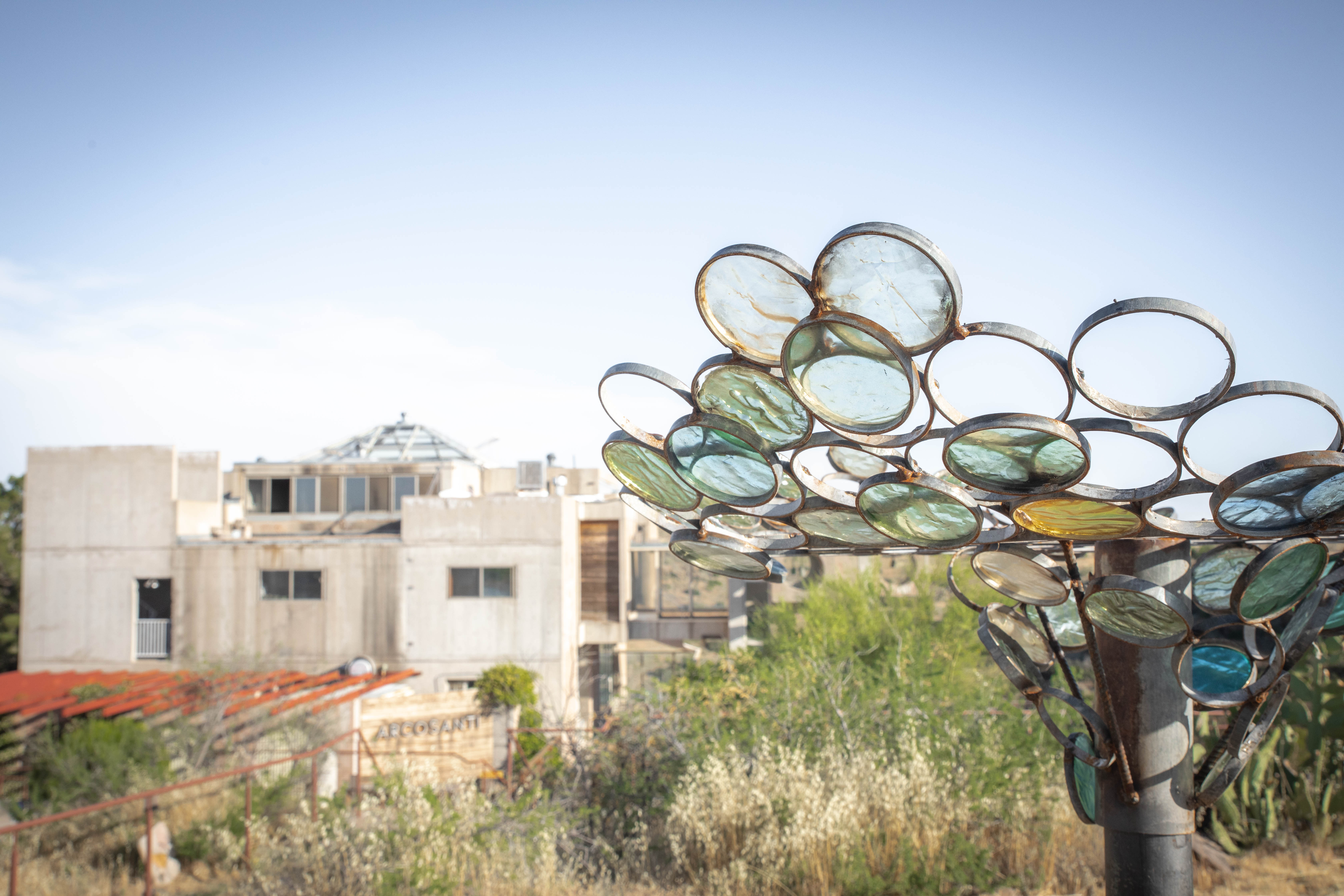 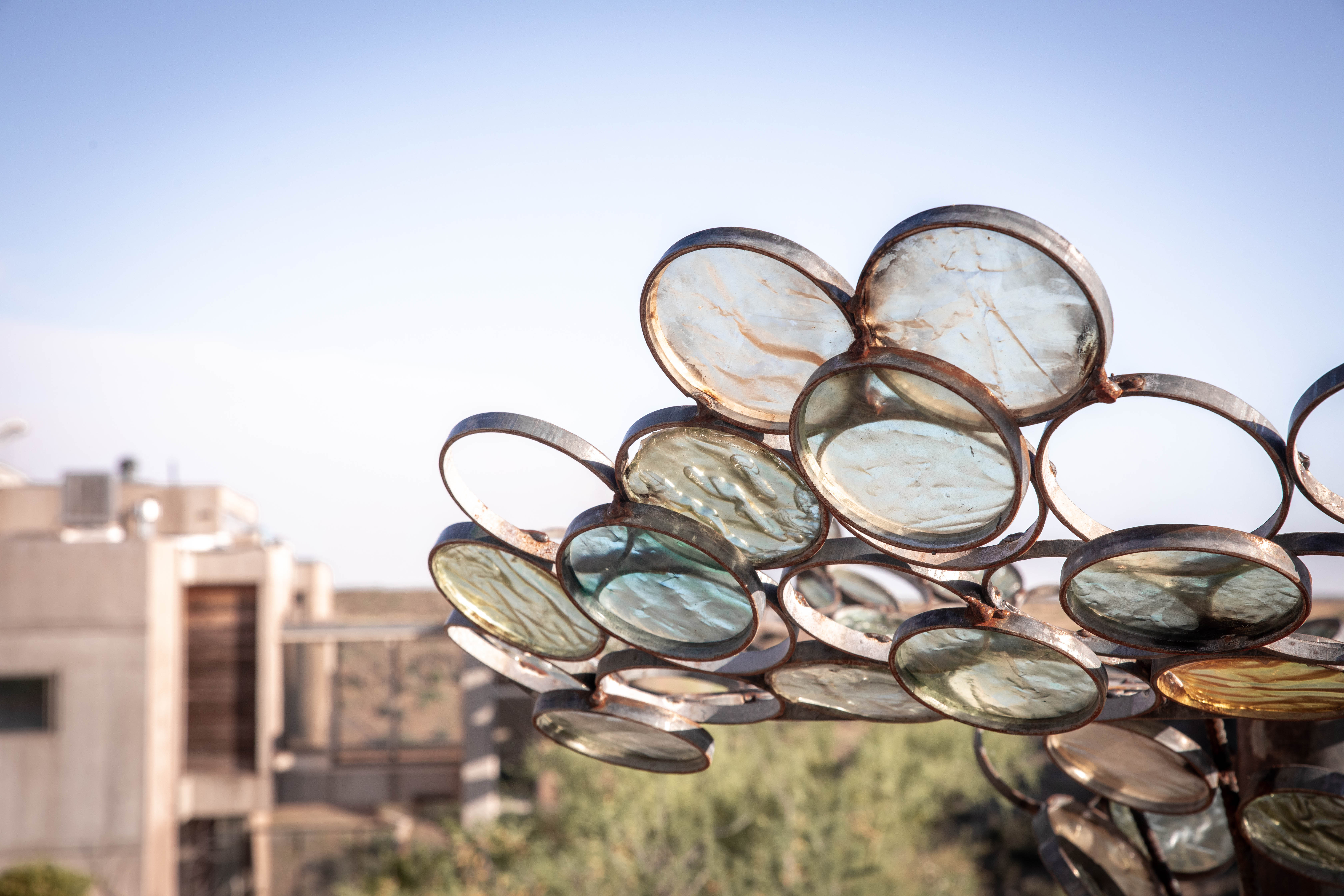 Jerome, which was something I was dying to see. The previous summer Blake and his

mom drove from Prescott through Jerome to Sedona. And he describes the town of

Jerome as if it was built like Italy, which made me excited that we were taking the

Jerome is supposedly one of the biggest Ghost Towns in America. Which only added

more to my excitement for going there. The original town sits about a half-mile

outside of the main road in Jerome and is a must-see. The city highlights this unique

That night we arrived late at The Views Inn at Sedona, which was a super cute

budget-friendly inn with great staff and breathtaking views. We arrived just after

from our hotel window! The manager surprisingly unlocked the pool for us even

though we had arrived after it was closed. And let me tell you, it was nice soaking in

that cold pool to cool off from the Arizona heat.

The next morning we woke up early to try a local coffee shop and get back on the road!

On our way to the coffee shop, we made a stop at the Chapel of the Holy Cross.

A beautiful place for worship built into the surrounding red rock.

After that excursion, we got back on our road trip itinerary saying goodbye to Sedona

and driving past Slide Rock on our way up to Flagstaff. In Flagstaff, we stopped to get

gas and some food, since we skipped breakfast and only shared a muffin we were

both starving! And we were both craving sandwiches. Propper Meats + Provisions was

protein options. I wish we had taken a picture before we devoured our pastrami and

pulled pork sandwich. But believe me when I say they were delicious.

That was when we hit the longest driving part of our trip. We had to drive through the Navajo Nation to

get to Four Corners national monument, and due to the Coronavirus, everything on the reservation was

shut down. We didn’t even think that would include the Four Corners monument until we made the

four-hour drive out there. And instead of being able to say we have stood on four different states at one

time, we get to say we were close. We got to stand outside the gate that had a huge sign that said closed.

Nevertheless, driving on the Navajo Nation territory was beautiful and we now have a funny story to

tell our friends and family! 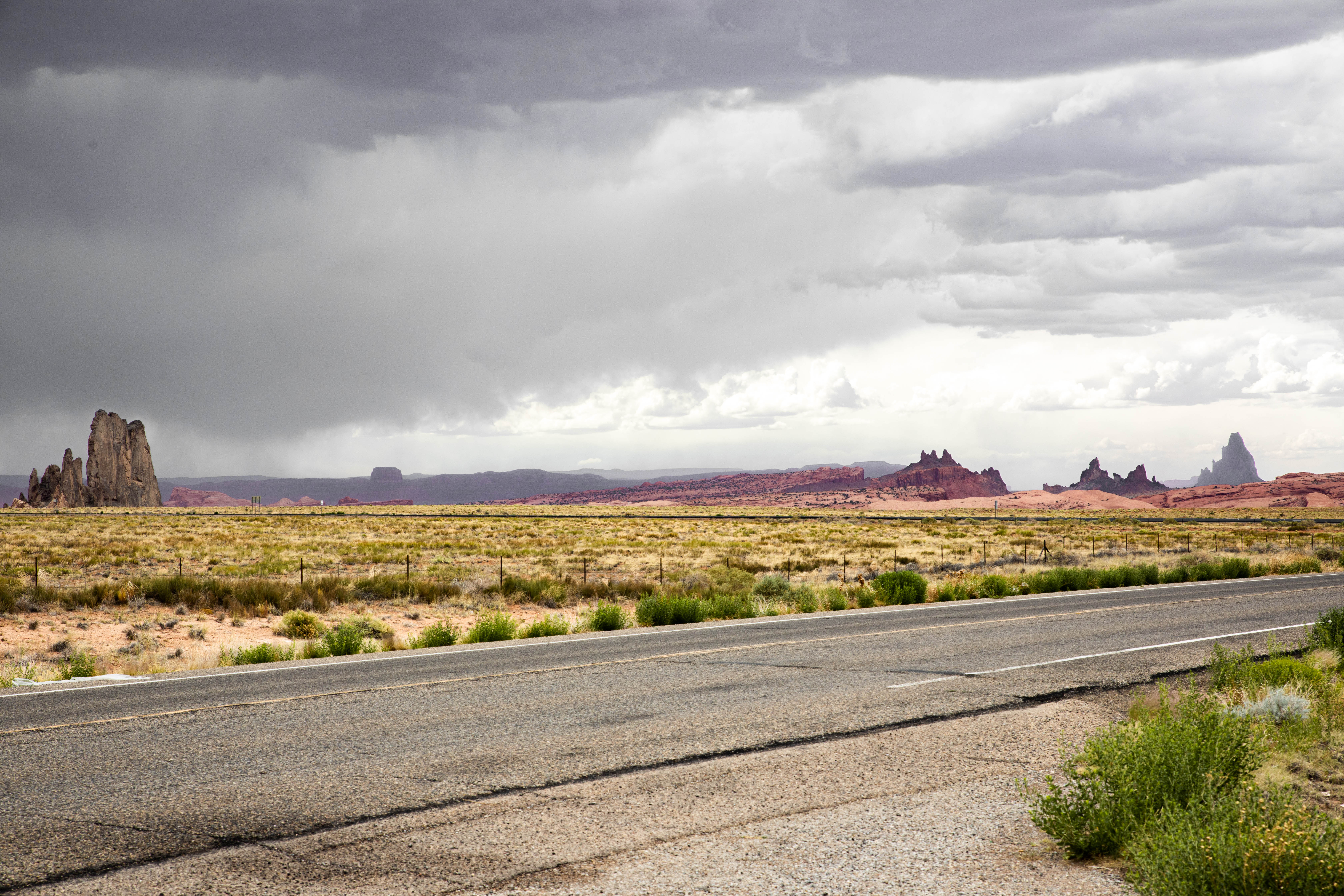 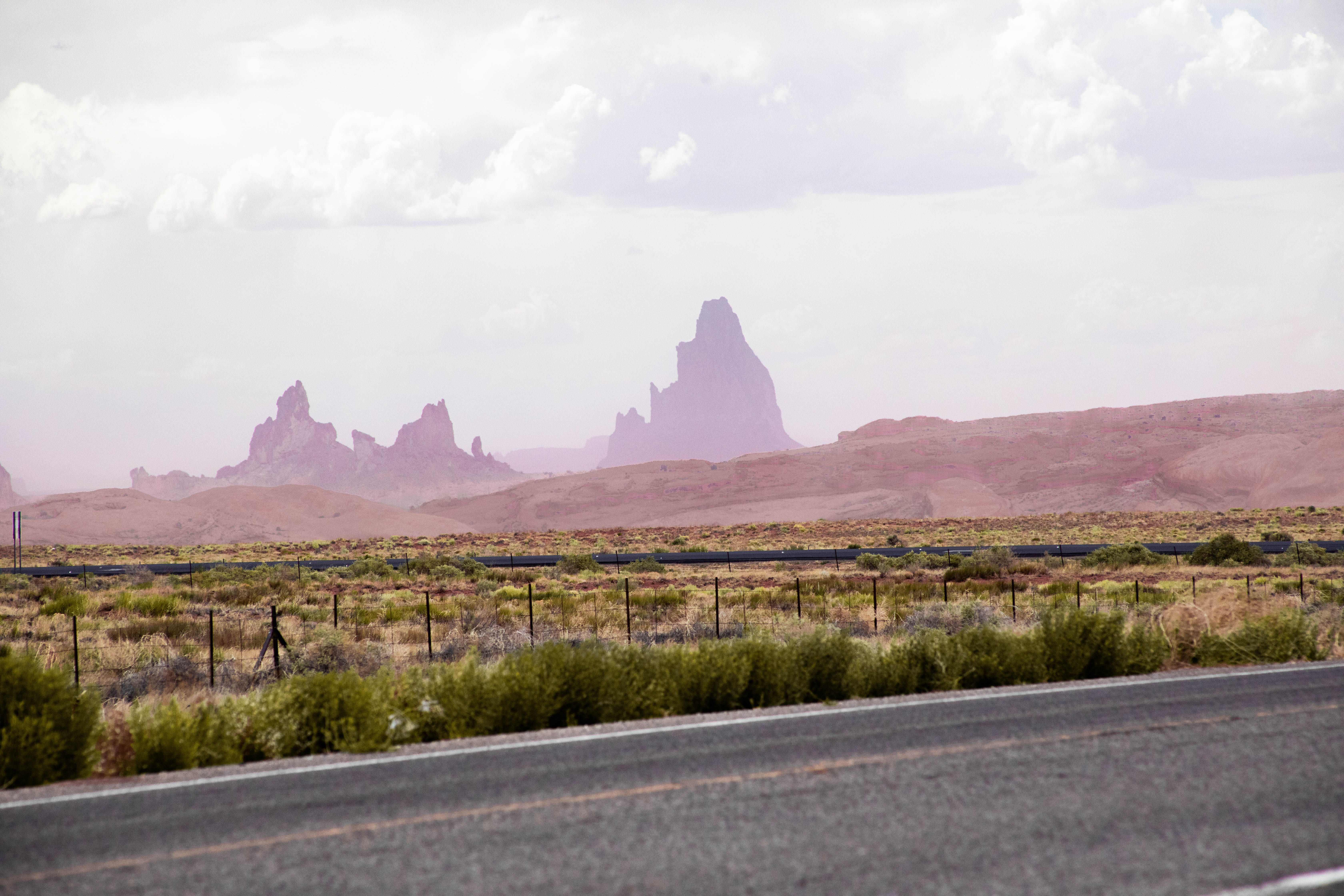 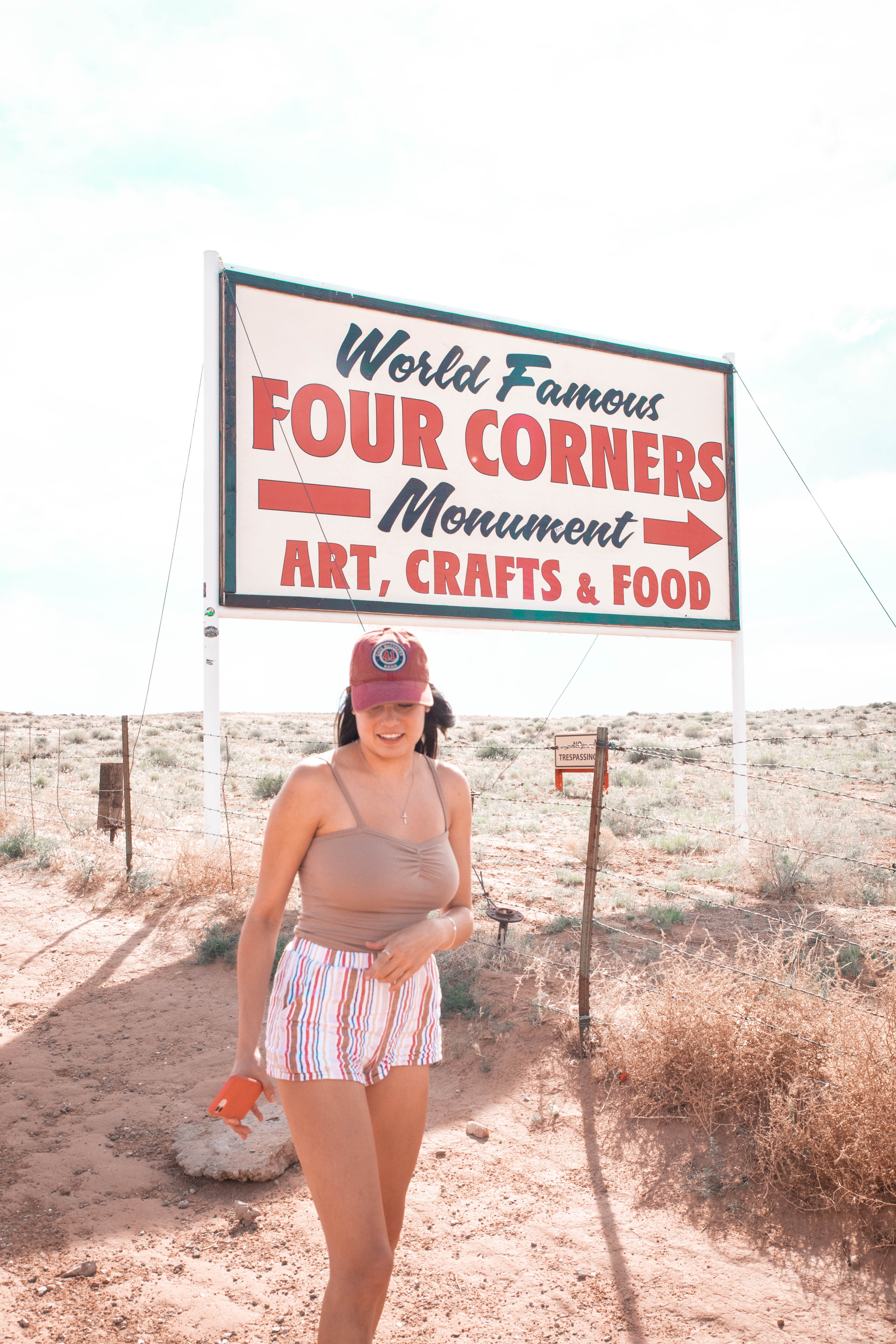 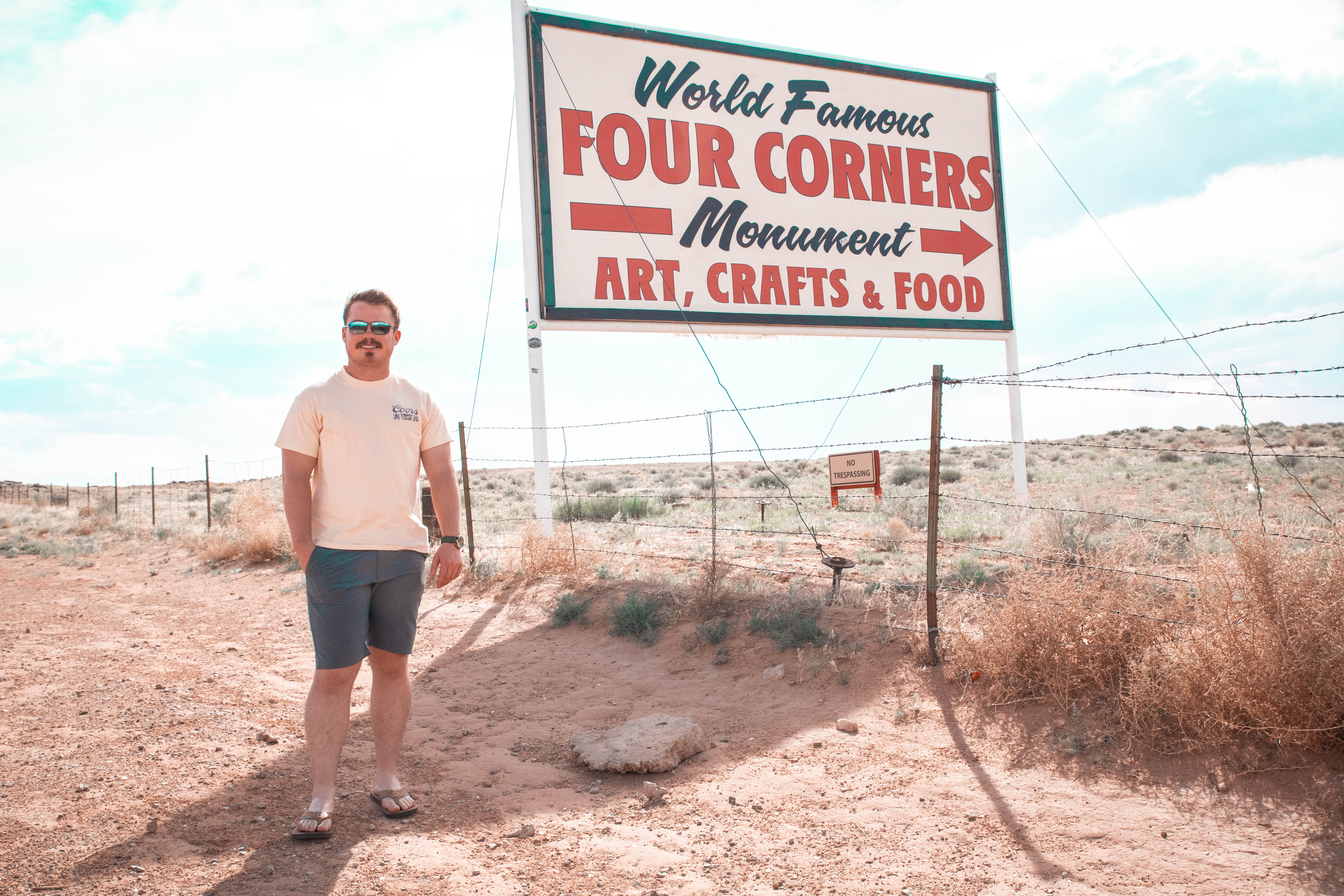 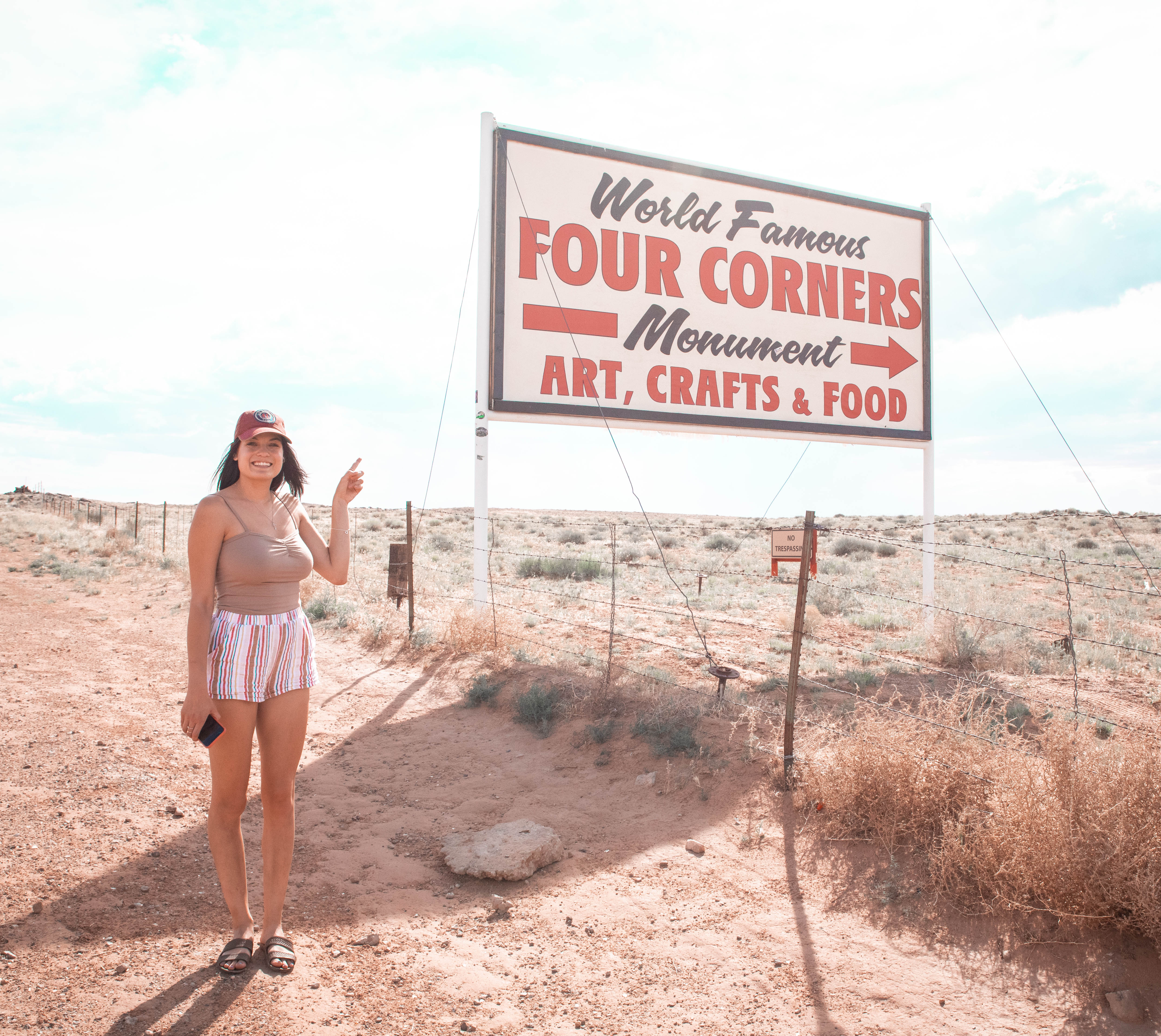 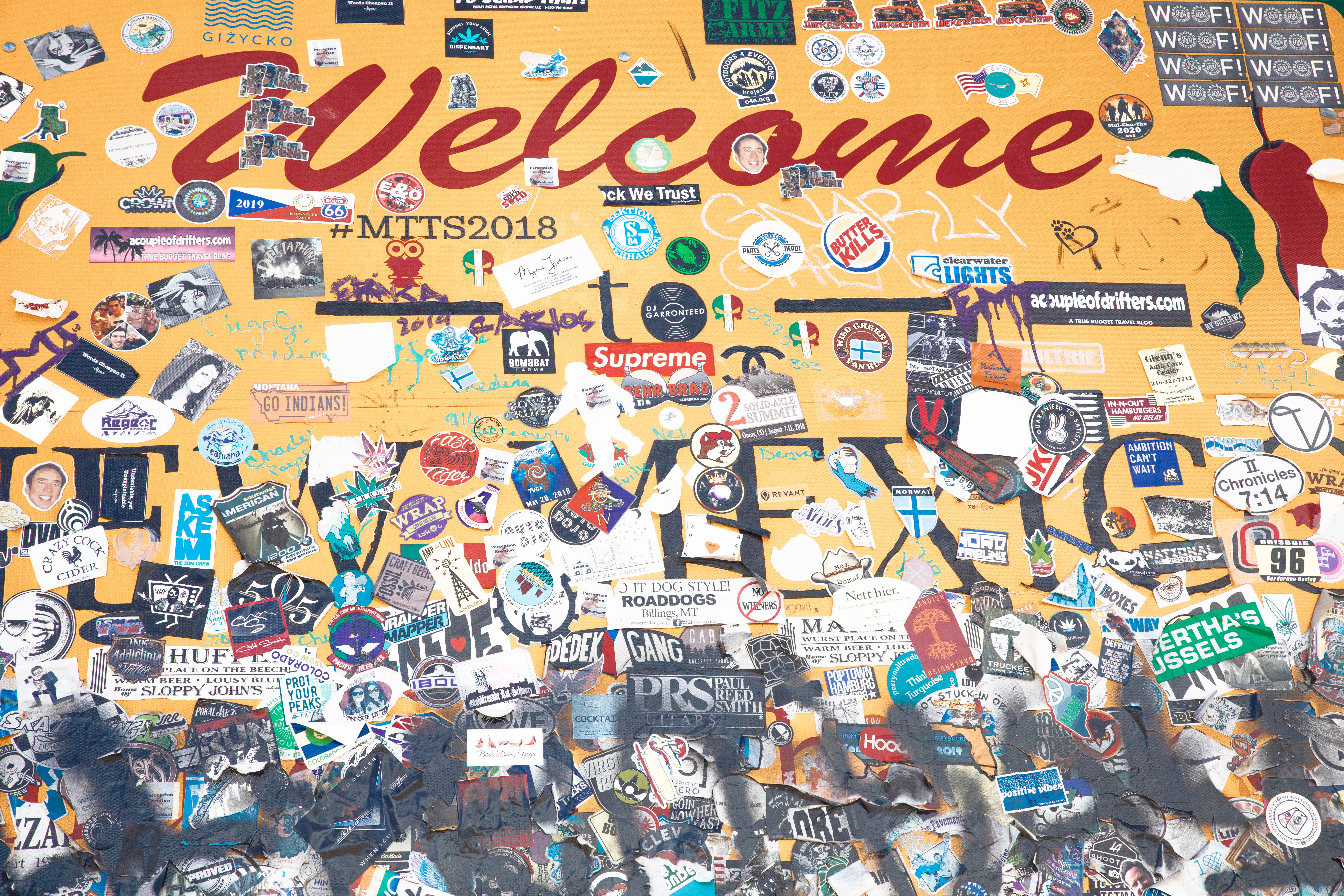 We then headed up to the Canyons of the Ancients National Monument, specifically

Lowry Pueblo. This site has a huge still standing pueblo one that you can even go

inside! Because there was a huge rainstorm when we were driving up to the

landmark, we were lucky enough to be the only people there, only adding to our

experience when walking around the structure.

Grist Mill Inn. An Inn that offers a hodgepodge of rooms and is connected by two old

silos. The silos are a bar and restaurant, a perfect place for a bite to eat and a beer

after a long day of traveling.

The next morning we decided to sleep in and enjoy the last bits of our vacation. That

day the plan was to head back to Utah with only a couple stops on the way. Newspaper

Rock was just a little way out from Moab and a quick stop too. Newspaper Rock is this

huge petroglyph carved onto the face of a rock and easily accessible to everyone.  The

name is derived from various etchings carved throughout the past thousand years.  Due

to the seemingly incoherent markings, it was thought that this was used as a graffiti

wall for the ancients.

Another easily accessible place is Hole ‘N’ the Rock. Right off the road is a place that

has many different bizarre attributes. One of them being a house built into the side of

a mountain! Crazy right? Many other things add to this unbelievable place, and I 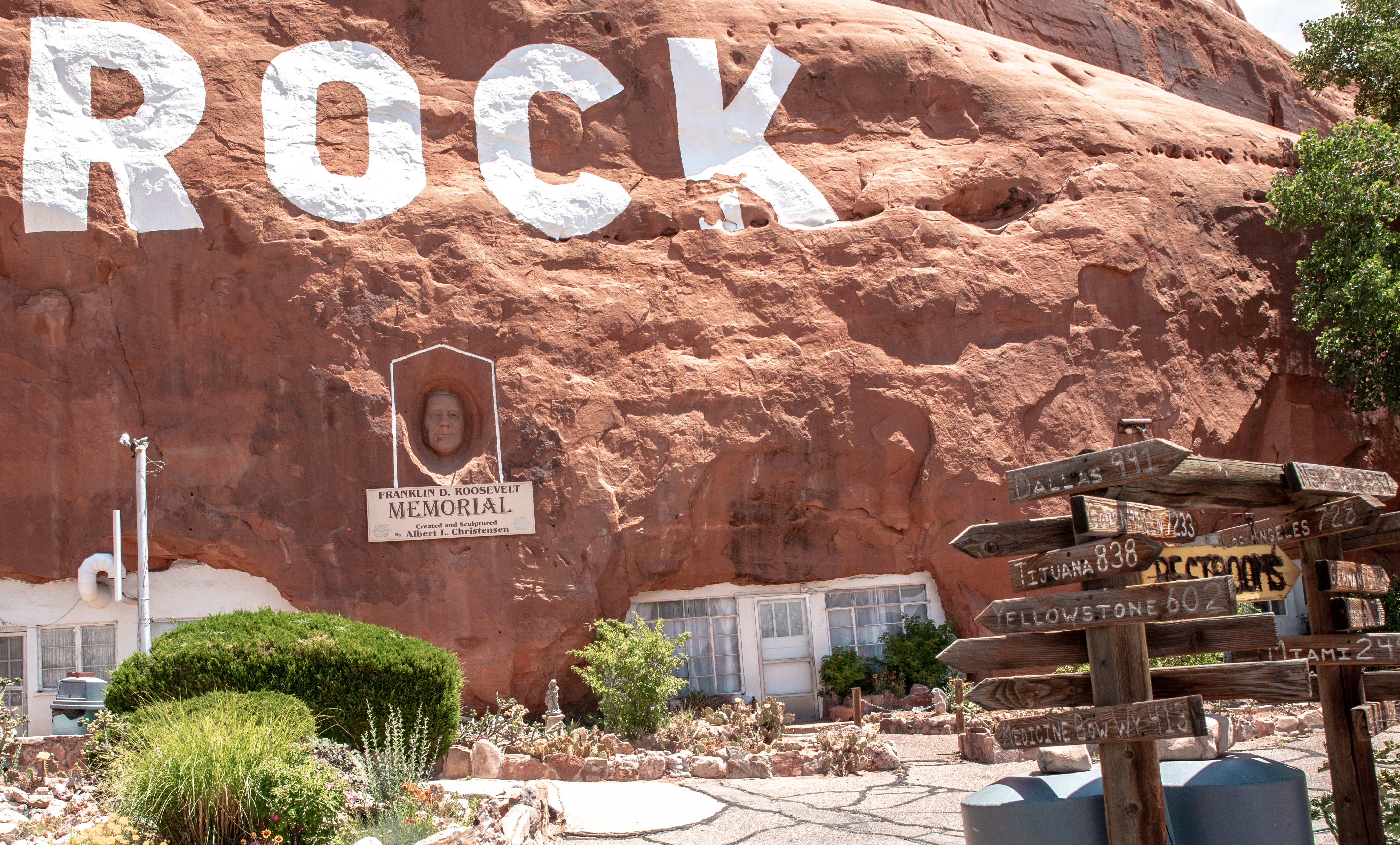 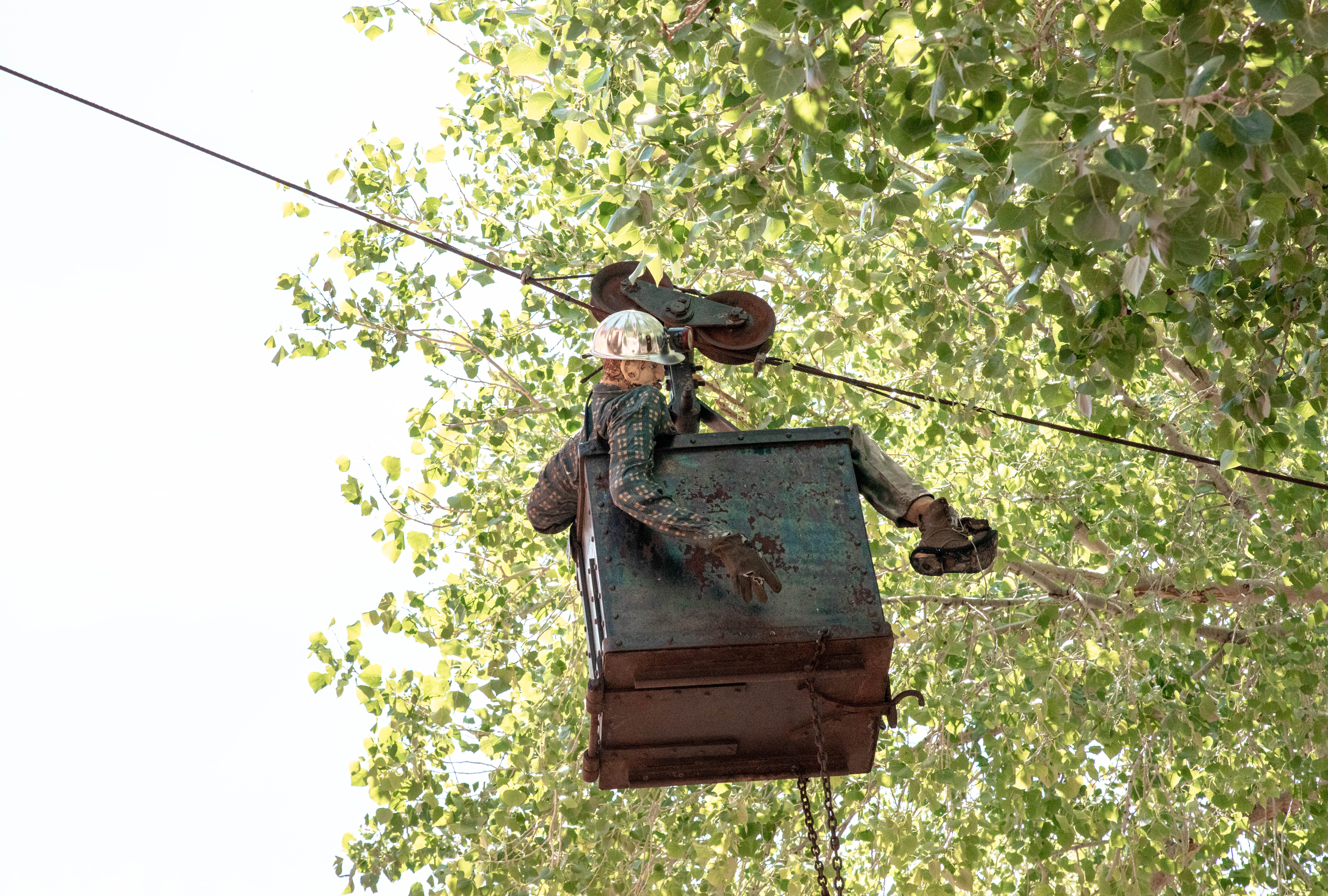 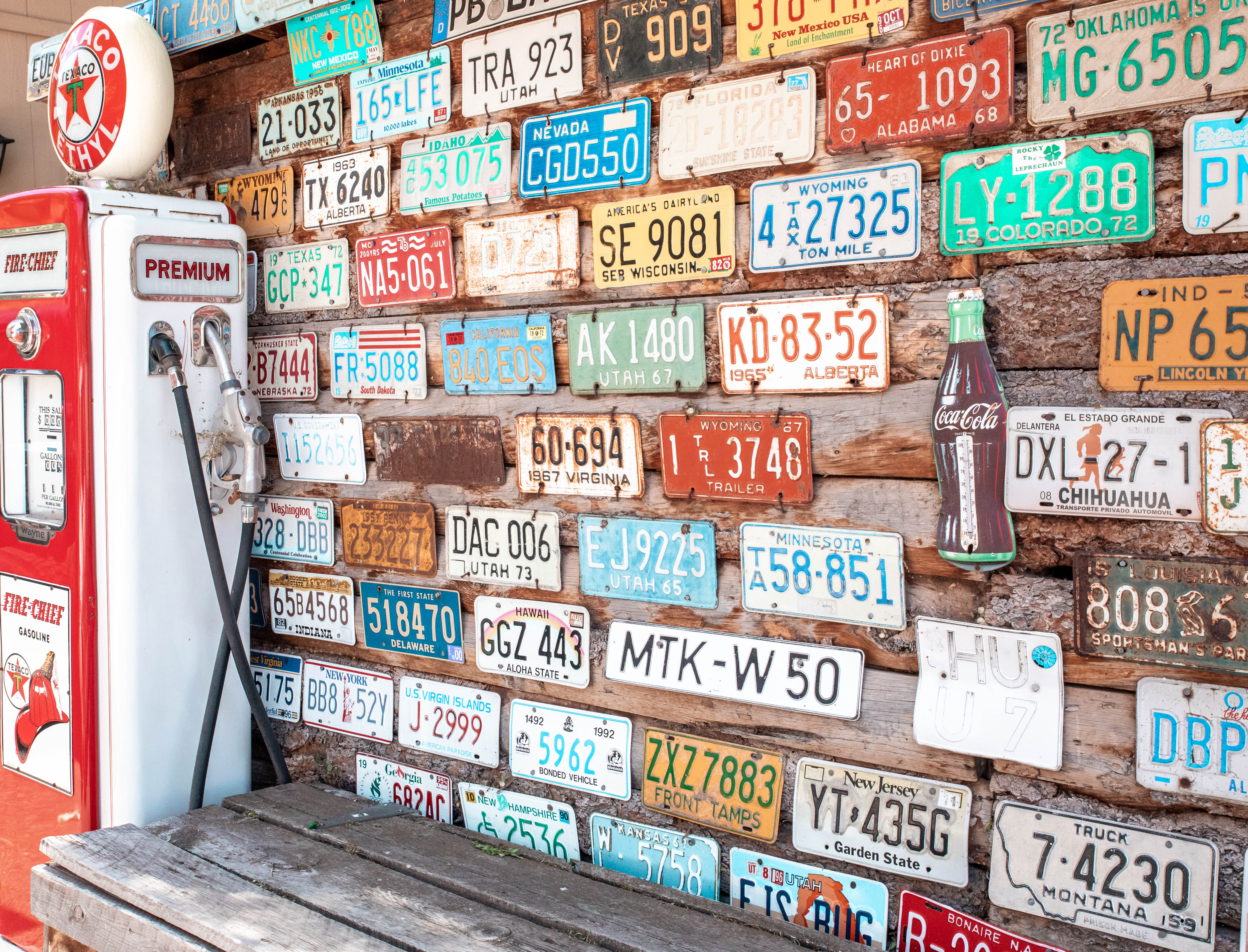 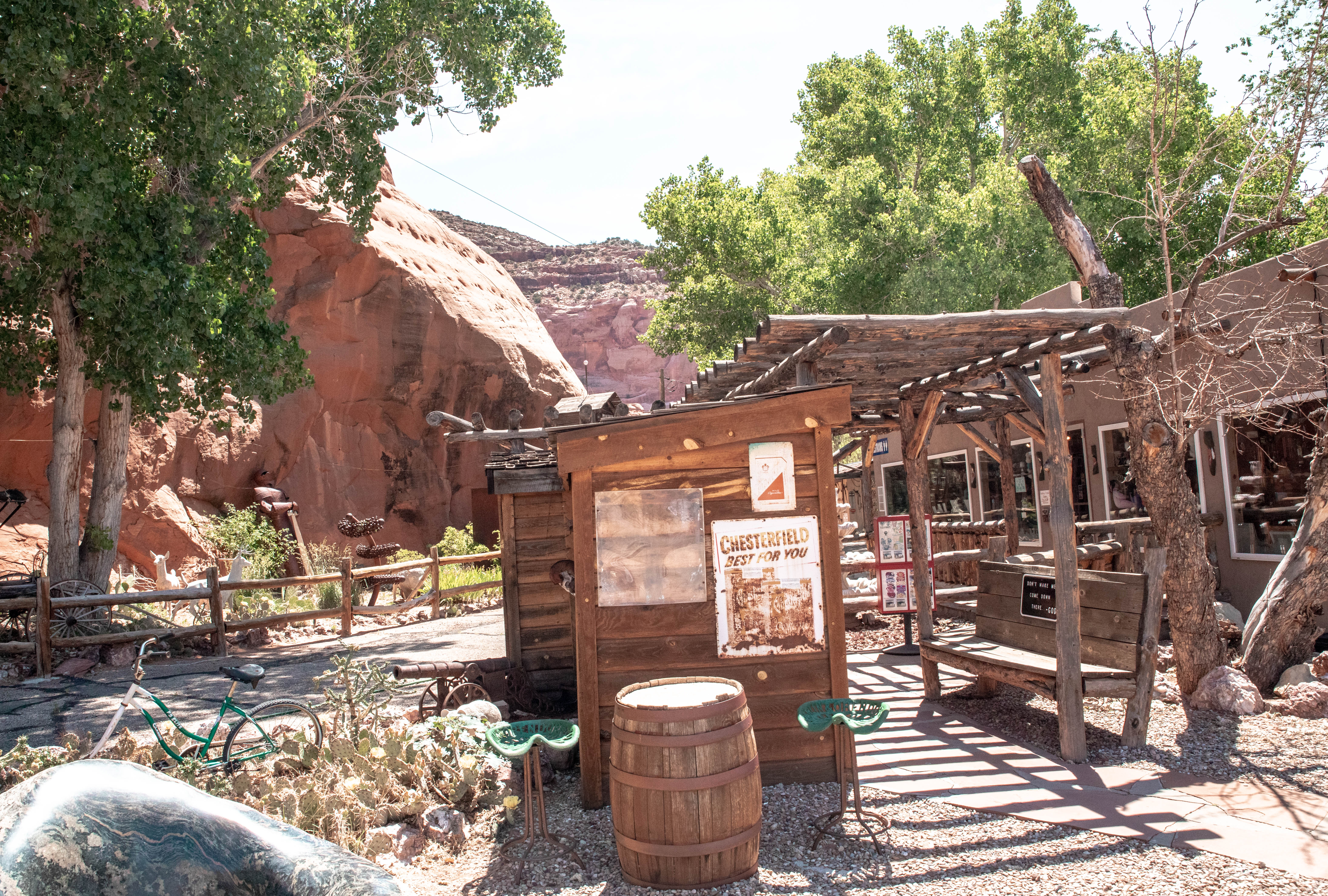 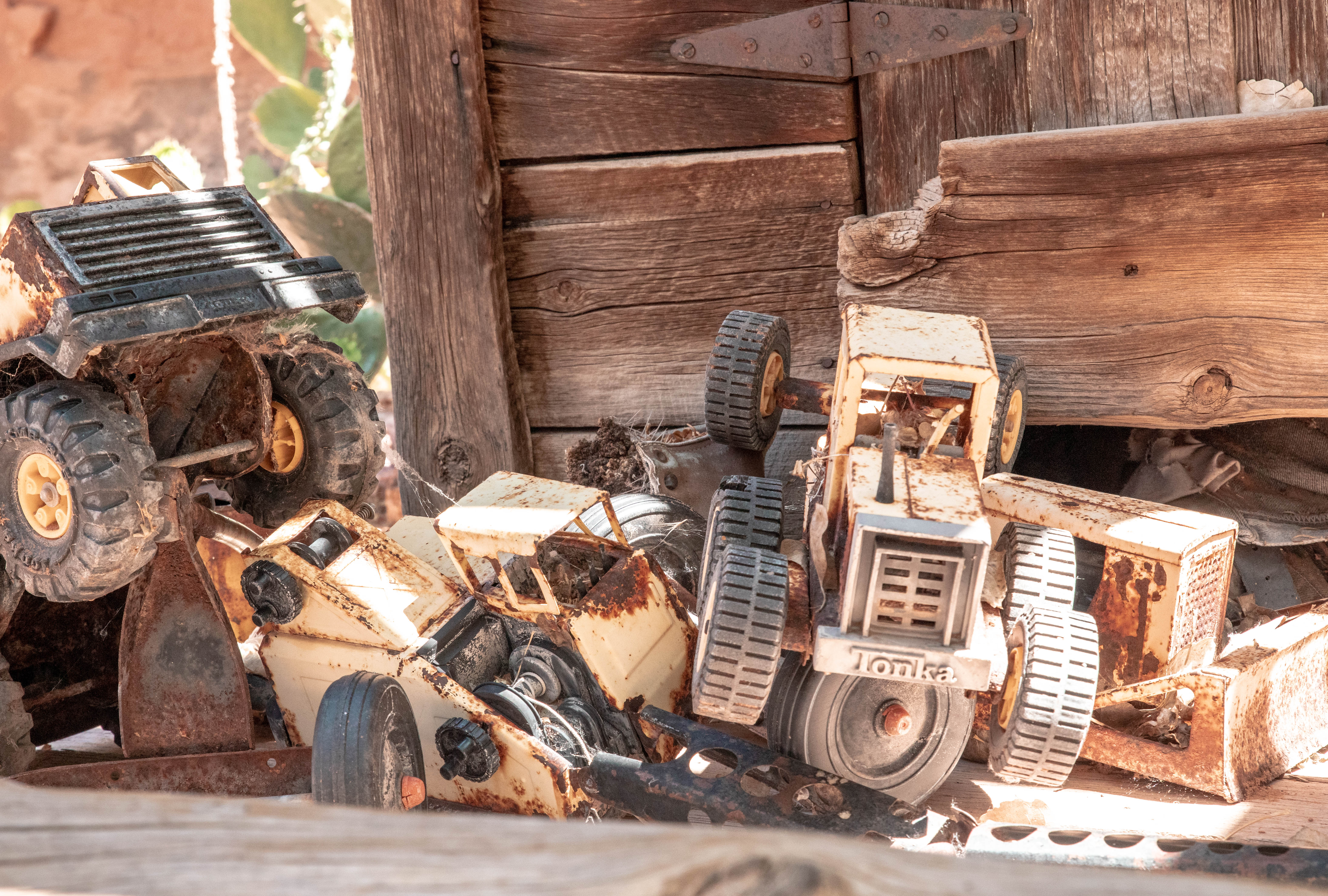 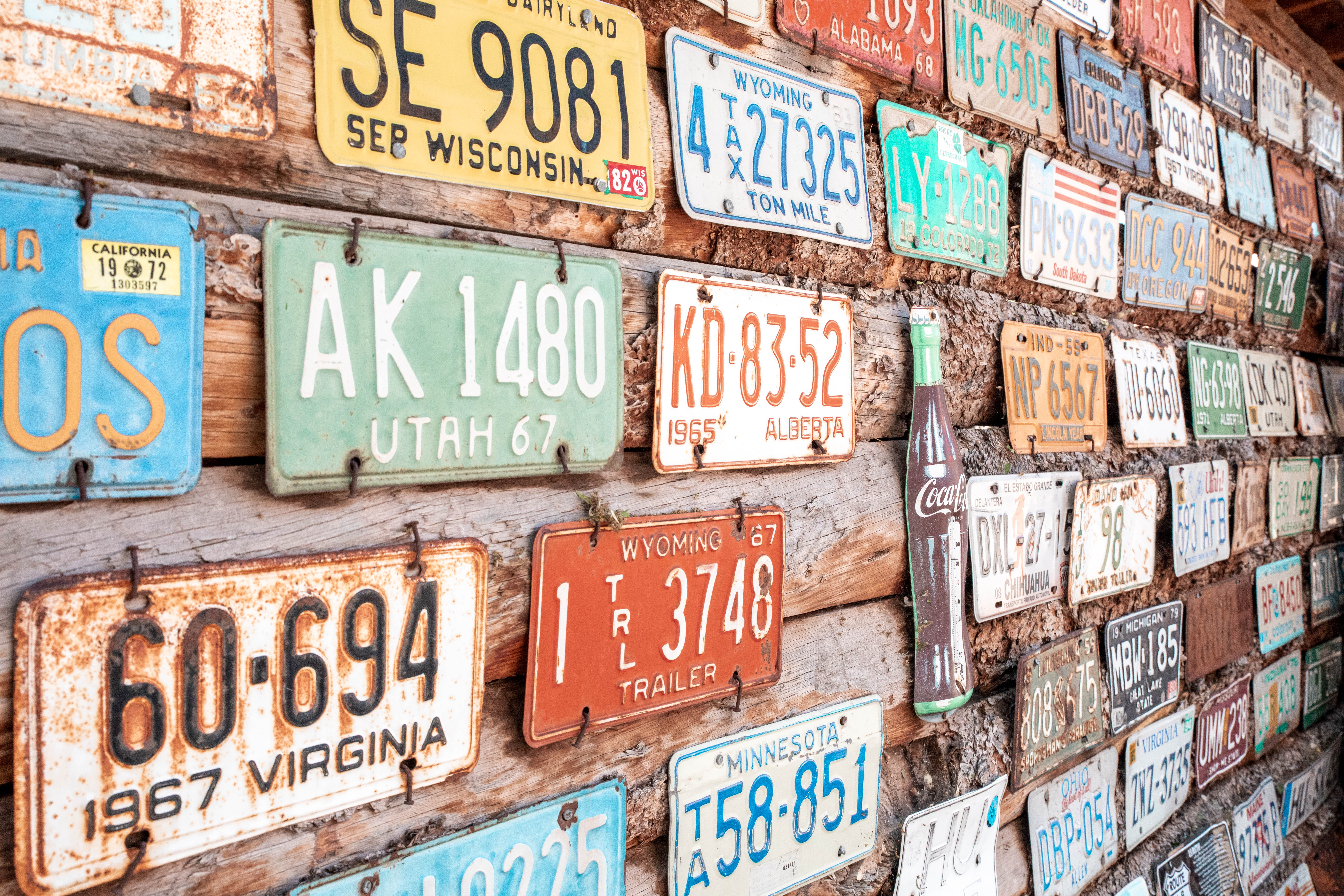 different ghost towns, geocaching and traveling up and down Route 66. Road trips

have always been apart of my life and always will be.

looking forward to my next adventure. Thank you Blake for this amazing one!